Perhaps all warning signs of reason had been abandoned in favor of optimism. Perhaps the planning hadn’t been as thorough as we told ourselves. Perhaps we just looked at a satellite image of a remote ridge stretching south from the Himalaya and decided to give it a go…

Waking at 4:30 in the dark and cold, we let ourselves out of the still sleeping guesthouse and began pedaling to the rendezvous point. Soon we could see headlights snaking down the abruptly steep outline of a mountain before us. When the goods carrier truck we had hired reached us, we lashed the mountain bikes to the truck bed and joined our bikes in the back for an incredibly violent ride up the serpentine track.

Between the interminably plodding pace of the truck, a tea break, lunch, a minor breakdown, and a few carefully considered muddy sections, we didn’t reach the 12,500ft (3,800m) pass until 3pm; nearly six hours longer than we had anticipated the drive would take. 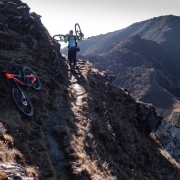 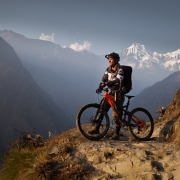 The effort of holding onto the headache rack to keep from being thrown from the back of the truck had already left our forearms pumped and knees stiff from absorbing jarring bumps. Needless to say, we were stoked to be out of the truck and finally on the bikes.

Immediately to the north of us stood the vertical faces of the Ganesh Himal massif, topping out at over 24,000ft (7,400m). Stretching in an endless line to the east and west of us the Himalayan range created the divide between Nepal and Tibet. From our vantage point we could even look behind Langtang Lirung to snow covered peaks in Tibet. Where we stood was an open ridge just above the tree line stretching south out of the Himalaya toward the smog buried capital of Kathmandu.

The plan was to ride two days down this ridge along a trail that looked smooth as silk on Google Maps’ satellite view. As we were to quickly find out, the view from a satellite can be a very deceptive reflection of reality. After about 5 pedal strokes, the altitude and attitude of the ridge caught up with us and we were reduced to what would be a most common position for us over the next couple days – pushing.

While a veritable highway on the satellite imagery, in reality, finding the trail was a bit of a treasure hunt. What the satellite also failed to reveal, was how frustrating it can be to carry a mountain bike through dense rhododendron forest.

By nightfall, we had already exhausted the most rideable section of the trail, and were face to face with an endless tangle of rhododendron forest that traversed a steep contour of the ridge. There was some talk of pressing forward by headlamp, but in the end, the lure of a small shepherd’s hut nearby won out.

The hut had no roof, but was rather a few short stone walls with slate flooring. Fortunately there was plenty of firewood in the area and we soon had a cheerful campfire illuminating our little retreat. Abel and I each chose a side of the fire to build small shelters of bamboo and grasses to keep the wind out. By the time we crawled into our sleeping bags we were too tired to attempt any kind of cooking, so dry packets of instant noodles became the flavor of the evening.

Between the cold, a predisposition toward sleeping on a mattress with a pillow, and the mites that dropped out of the grasses to crawl happy circles around my face, it was a fairly sleepless night. Abel however, had brought an inflatable mattress and either smelled bad enough to keep the mites at bay, or was just impervious to their tickling feet. Needless to say he looked much fresher than I when I re-lit the fire at 4 am.

It took us a couple hours of bold attempts to press forward before we admitted defeat by the energy-zapping ridge. We turned around and began the push back toward the road.

Of course, there was no way we were really going to settle for just retracing our steps! Soon we were bailing off the backside of the mountain toward country neither of us had been to before – a route called the Ruby Valley Trek.

The updated plan was simple: bushwhack to the road, coast down as far as the excavator had cut the road from the mountain side, ride beautiful single track to the valley bottom (as described to us by local mountain boys), where we would meet a road with jeeps for hire (as again described to us by the local boys). Then we would hitch a several hour jeep ride out of wilderness to the nearest highway. With luck, we would be back in Kathmandu tomorrow to enjoy Tihar festival with friends.

Reality, however, would send us hurtling down 7,500ft of mountainside – much of it far better suited to walking than riding. At the valley bottom, there was no road as told us. Instead, we were presented with a 1,200ft (370m) push up another impossibly steep mountainside. That accomplished, the trail again dove off a near cliff before we reached the small village of Borang. Dusk accompanied us as we walked into town, mountain bikes on our shoulders.

Somewhere along the way we met a group of trekkers carrying large backpacks and following a guide. “What! No way; mountain bikes!? What are you doing out here?” was the shocked greeting from the trekkers. We had to laugh and admit that we too weren’t sure what we were doing here with the mountain bikes. In fact, we joked that today the bikes rode us more than we rode the bikes.

Borang was alive as a mountain village can be. Being one of the main days of Tihar (the festival of lights), children were singing in the street and sparkling strings of colored lights draped the front of the local guesthouse we parked at. The proprietor was eager for our business and quickly wheeled our mountain bikes into a simple guest room to ensure our stay. Dried water buffalo meat was fried, rice cooked, and warm beers procured from somewhere in the market. Soon we were living like kings.

First light found us chowing down on breakfast of instant noodles with egg. Energy for the road, we waved goodby to our friendly host and set off in search of this fabled road.

High above the river, the rocky trail clung to terraced fields and wove through quiet hamlets. A cheerful elderly man was drying locally grown cardamom pods on the roof of his hut and happily sold Abel a couple handfuls. A short hour later we rounded a corner to meet the end of the rumored road.

Like so many roads in the Himalaya, it ends abruptly, carved as far as finances allowed, then abandoned. There were no jeeps here, or anywhere for the next couple hours as the road was subject to landslides and piles of fallen rock. When we did finally reach a village with a jeep, it was discovered that the driver was absently recovering from last night’s festivities. This was the story all day until sometime around 3 in the afternoon we heard a vehicle approaching us from behind.

After alternately pushing and pedaling up the last 2,000 vertical feet (610m) of dusty track, we weren’t too proud to flag down the approaching jeep and ask for a ride the final 1,000ft (305m) of climb to the pass.

Our day finished with 3000ft (915m) of fun descent to the district hub town of Dhading Besi. Again we rolled into town with dusk, but this time actually riding our bikes!

There was no need to press on in the dark. Tomorrow a short one-hour pedal and a couple hours in local busses would return us to Kathmandu. For now we could get a hotel room and a hot shower.

Sitting on the rooftop of our hotel overlooking the glittering Tihar lights stretching into the darkness we had a good laugh at how we had just inadvertently completed the Ruby Valley Trek with mountain bikes. We both agreed the route made for a great trek, but a horrible mountain bike ride. And we were both dead set on returning to our originally planned route down the ridge – but next time exchanging mountain bikes for hiking boots.

Explore Journeys
Snickers for the Journey